Specialists in Conservation Book Repair and Rebinding. Consult us for advice and quotations, from a 16th Century archival volume to a modern presentation edition leather binding.

We were recently commissioned to create a leather presentation book
box to hold the five volume set...  ART AND ARCHITECTURE OF IRELAND .
A fully illustrated account of the art and architecture of Ireland from the Middle ages to the end of the twentieth century.

The solid wood box was bound in full calf skin leather, the title and logo were tooled in gold on the cover. The interior was finished using handmade Parisian Marble papers.The box closed with a  leather book strap and brass stud. 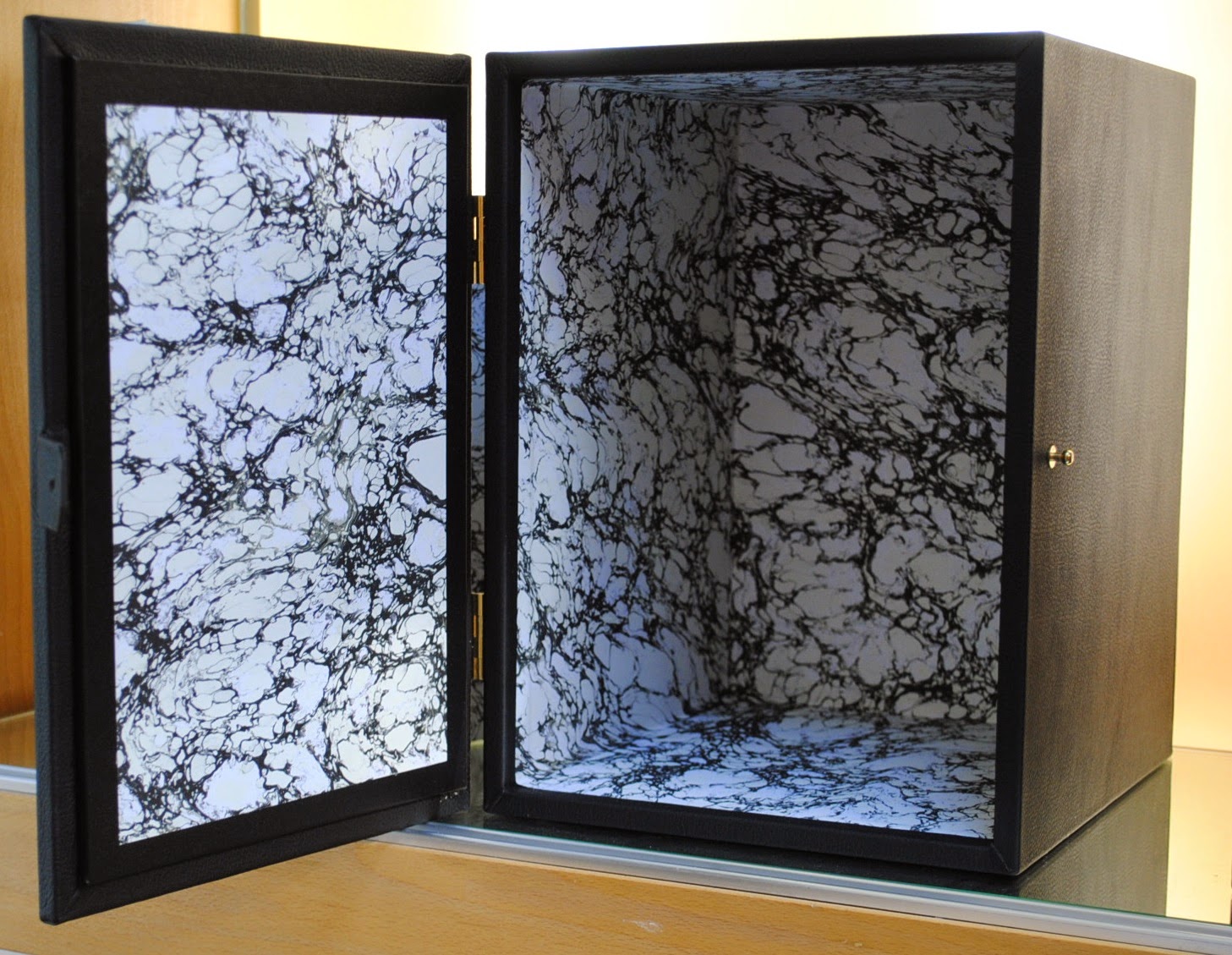 Thirteen of these boxes were required in total with each box individually personalised with names gold tooled on the cover.
The solid timber and full leather box structure was necessary due to the impressive weight of the five volume set.


Posted by Mucros Conservation Bookbinding at 09:23 No comments:


Searching for the New Jerusalem

An Exhibition of the original Stained glass Drawings from Saint Fin Barre's Cathedral, Cork.
22 November 2013 - 23 March 2014
Searching for the New Jerusalem presents the original preparatory drawings designed by the Victorian architect William Burges (1827- 1881) for Saint Fin Barre’s Cathedral in Cork. Commissioned to rebuild
the Cathedral in 1863, Burges would go on to design the architecture, stained glass, statuary, mosaics and furniture of the building.

We began work on this project back in 2006. The above image gives some idea of the condition
of the cartoons when we brought them to the workshop.
Consisting of over 100 Cartoons, The pieces displayed signs of poor storage and ad hoc repairs, brown packaging tape on the verso, tears, damaged edges,and handling and display damage. 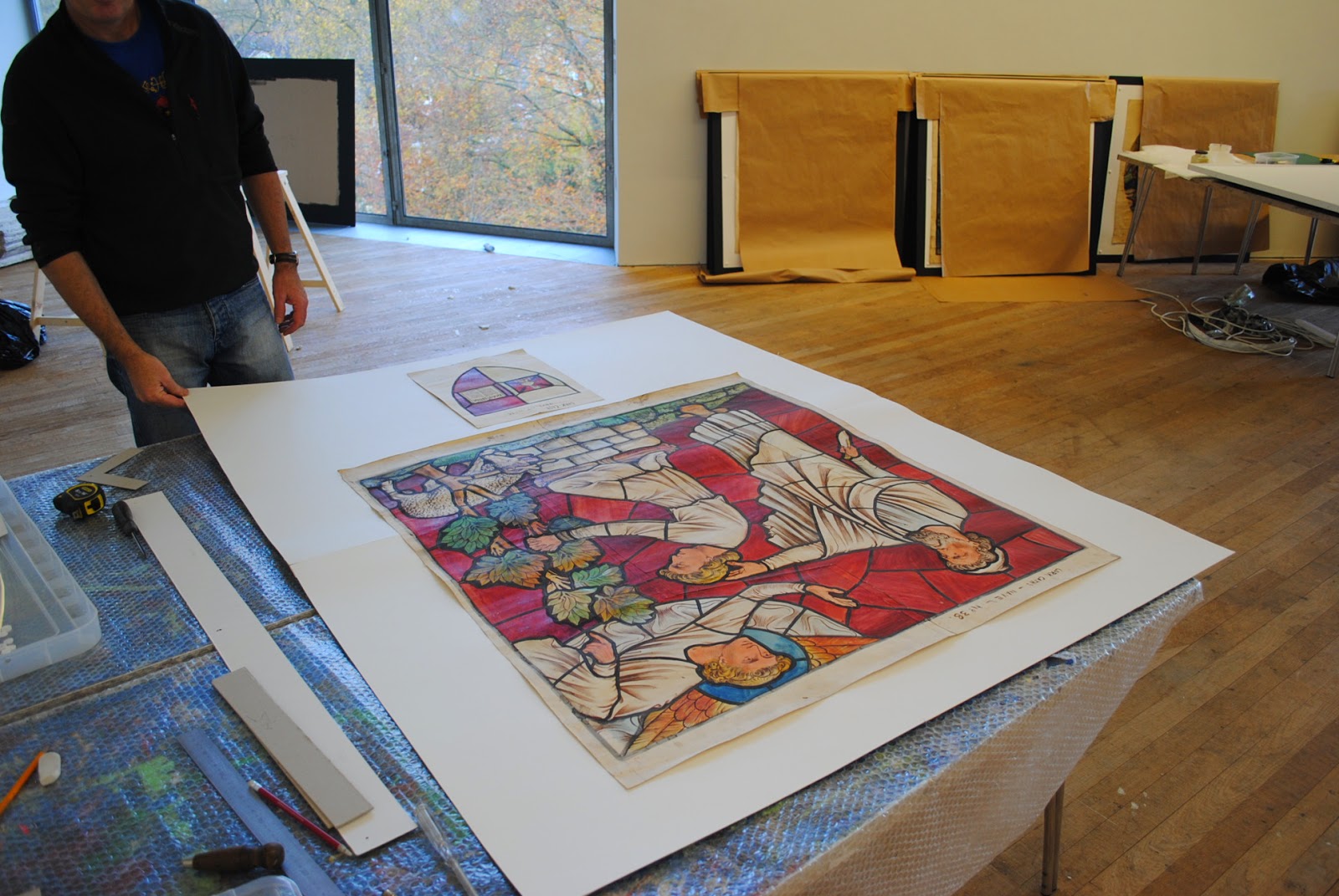 The Collection is housed in the Special collections Archive in UCC, Cork.

A small collection of the Conserved works were displayed in the Glucksman Gallery, UCC Cork, Autumn 2013.
The Conserved Cartoons were displayed float mounted with all irregular edges exposed.This allowed  historical wear and tear and the recent
conservation to be clearly displayed.

Posted by Mucros Conservation Bookbinding at 09:05 No comments:

In June of last year we were approached by Ashford Studio's the producers of Vikings, the New TV series filmed in Wicklow. 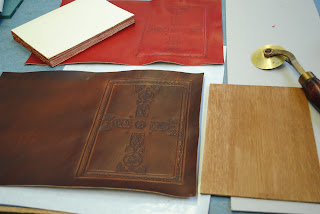 We produced a replica 8th century illuminated manuscript for the series.
Handbound in leather and using oak boards from a fallen Oak in the National Park, Killarney.
The series is set in the 8th century, it portrays Ragnar as a Viking farmer who pioneers the first daring raid into Britain with the support of fellow warriors. 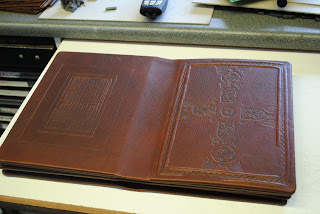 The book will deteriorate a lot throughout the different episodes of the series so we had to produce seven repeats of the prop itself. These volumes were then aged to represent the longevity of the volume. 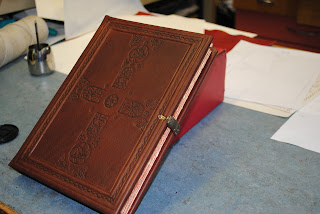 Having hand sewn the pages we attached Irish Linen hinges on the endpapers. These were then pasted back on to the Oak boards, and left exposed. We used Oak boards aged over 30 years as was in keeping with the binding style of the period.

The leather cover is overlaid with a decorative   metal intricate cross, and a foredge clasp. The images here were taken before the book was distressed by the set designers.
Mucros Conservation Bookbinding,Muckross House, Killarney, Co. Kerry, Ireland. Tel: 064-6670151. Email: bindery@muckross-house.ie.﻿
Posted by Mucros Conservation Bookbinding at 08:53 No comments:

Have just completed the housing for this project for Catriona Mulcahy, ArchivIst UCC.
Comprising two collections of vellum Charters from University College, Cork ( previously Queens College ). The vellum had been folded and subject to handling and soiling over a long period. 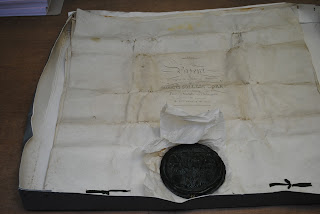 The first set, ( 760mm x 1020mm ) comprised five vellum charters with an attached wax seal. These had been folded and stored over a long period in a small container. Relaxation and flattening between blotters and using a drum method over a period of two months returned the vellum to its original shape. Surface cleaning where possible enhanced the finish. The large wax seal is attached to the charters by a braided multi stranded cord in a complex knit designed to highlight any interference or tampering. This was left in situ and remains intact. The constant presence of the seal and the protection of it, complicated the conservation process.
Housed in a custom made unit, the vellum is held between four mylar strips on an acid free mount.
This is then housed in a folder made of 5mm acidfree elephant millboard bound in Morocco goatskin and archival Library buckram.
The wax seal is in a custom housing of fome-core board with Polyzote padding 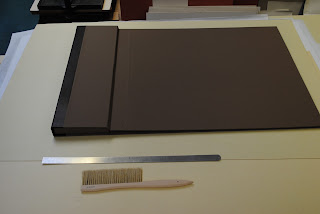 The second collection is slightly larger in overall size, ( 815mm x 1010mm ) and comprises 10 vellum charters. These required longer relaxation and flattening as the vellum had set in its previously folded state.
A similar binding and housing was produced, with the same problems regarding protection of the wax seal.
Posted by Mucros Conservation Bookbinding at 07:39 No comments:

Ennis Town Commissioners Minute Book  was required for a civic function in Ennis on Friday 22nd February. Irene Franklin, Archivist, Clare County Council had the volume delivered to us in   the bindery in Muckross House.
The volume required overall dry cleaning using smoke sponge, cotton wool and erasers. The first few section and the last sections were loose and in need of paper repairs. We toned Japanese tissue  and commenced tear and spine repairs.
Old index tabs were removed as these had been crudely attached at a later stage. After sewing the volume was lined with Japanese tissue and Aero Linen.

As the volume had no binding we rebound in a similar style to its original . Acid free elephant boards were laced in under linen joints. Rebound in an Acid free Archival calf  spine with Heritage buckram sides and Archival calf lettering piece blind blocked.

We managed to complete the project and delivered it back to Clare County Archives in the tight time frame window required. 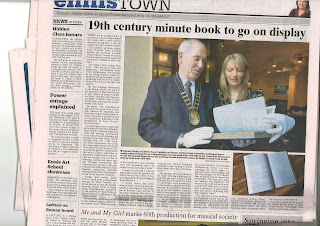 The Great Book of Ireland

Conservation work on the Great Book of Ireland

The vellum manuscript, which  has been described by Mary Robinson as a modern day Book of Kells, has been acquired by UCC  and is now safely housed in Special Collections. I have been involved in book conservation in UCC for about 10 years, and in conjunction with Cronan O'Doibhlin and the archivists, have been preparing this volume for its relaunch

Careful housing, handling, future exhibitions, digital imaging and long term safe storage are issues, as well as condition reports and conservation treatments.
﻿
﻿
Over the past few months I have been working on digital imaging, ( using the  talents of David Davidson ) and controlling  the  display conditions leading up to the launch in UCC on 18th January.
The Great Book of Ireland , which comprises the original work of nine composers, 121 artists and 143 poets, is a handbound vellum manuscript with original artworks, poetry and calligraphy.


Bound using Irish vellum in goatskin, over elm boards hewn from a tree planted by W. B . Yeats in Thoor Ballylee.
Three literature Nobel Laureates, Samuel Becket, Seamus Heaney and Derek Walcott feature.
It was produced in Dublin between 1989 and 1991.
President Michael D. Higgins marked the acquisition at a special ceremony in UCC, attended by many of the original poets and artists.
With original pieces by Louis le Brocquy, with Samuel Beckett's last ever handwritten contribution receiving particular attention.

The Volume is divided between his stunning landscapes and seascapes of Ireland.
Using Kickstarter he funded a limited edition collection of 50 volumes. Handbound in blue Italian calf with buckram sides with silver embossing, and silver tooling on the spine.

The volume is housed in a buckram bookbox with a Peter Cox original seascape image on the side.
Completed in Early September the collection
sold out prior to launch.
Peters work is available to view in his High St, Killarney, Gallery